Ignazio Silone (Secondino Tranquilli) had a prominent nose with a small bump, common to all the Tranquilli family (“naso gibboso” according to the fascist police identiy report, dated 16 May 1925). 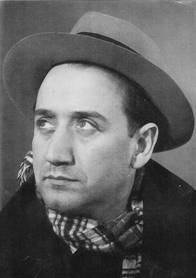 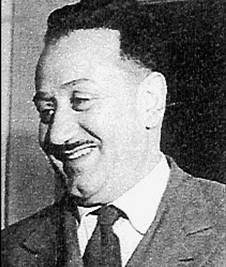 Silone’s nose, together with other details, has been altered by his accusers.

It has become straight and sharp.  Et voila,  tampered with a point,  Silone resembles Hitler! 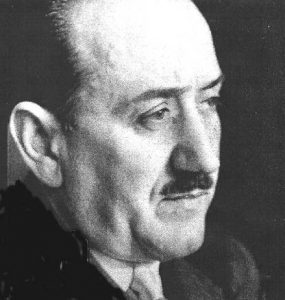 The photograph, the physical image has been as distorted, as his life

Starting in 1996 a strange phenomenon occurred which is still causing much outcry in the Italian and international press.

Ignazio Silone, the young boy passionate about his political vocation, the militant politician always with the opposition —  anti-fascist during Fascism, anti-Stalin while Stalin governed international communism — is  accused of having always been a spy since his youth.   Silone victim of a pathological duplicity had supposedly been an informer of  his party companions since he was nineteen years old to the political police while he was head of the Socialist Youth Federation, then to the fascist police after he became at twentyone years old one of the top executives of the Italian Communist Party.

Silone, the Italian intellectual famous abroad,  the writer considered worldwide a leading interpreter of  ethics,  the  prominent exponent of democratic socialism, has had his distinctive features,  his personal and historically proven facts,  changed by Dario Biocca e Mauro Canali,  two historians who built their academic careers on the case.

But Silone’s entire life and written heritage proof that there is only one truth about him,  and not many truths. (See “Il  filo  della vita”, “Cronologia” and “Le Opere”).

The historian Giuseppe Tamburrano analizing the same archival sources as those used by Silone’s  accusers, has shown — in the books Processo a Silone, la disavventura di un povero cristiano,  2001 and in Il “caso” Silone,  2006 — that the information supposedly passsed to the police by Silone is all typewritten, strictly anonymous and coming from various people, while the only handwritten document inspected by a handwriting expert, shows that Silone did not write it.   The accusers, all in all,  attribute to Silone any anonymous document found in the archives that had not been attribuable to anyone else. As demonstrated by Giuseppe Tamburrano, the accusers manipulated the documents adding non existent words or shifting others in the context;  pretending that Silone did not know French;  provided wrong information regarding a photograph, in which Silone appears;  maliciously attributed to Silone the code number OVRA 73.

Furthermore, carried on the wave of enthusiasm for the reception received, the accusers went so far as to establish the principle for which the absence from the police archive of a list they required to support their accusation, demonstrates with incontrovertible certainty the presence of Silone’s name in the absent list!  So, the fact that Silone’s name does not appear in the list of spies of 1938, demonstrates that Silone was in the 1930 list —  that list, however,  does not exist!  (See “Press Review”).

Giuseppe Tamburrano has provided evidence of how Silone (as head of the clandestine structure of the Communist party, Silone had the necessary competence) immediately after the arrest of his brother in 1928 pretended to be an informer,  giving harmless and foolish pieces of news, in an attempt to save his brother from the death penalty.

When he was fourteen years old, Silone helped dig with his bare hands in the rubble of the Abruzzo earthquake of 1915, slowly seeing his nine year old brother’s face appear, after everyone had given him up as dead, as he had been buried for five days next to the body of his mother. The brother was the only family member that Silone had left. Thirteen years later, he had to try any possible way  in the attempt to save him a second time from a quake of a completely different nature and help him escape from the grip of fascist torturers. However, notwithstanding the boy was strong and athletic, he died following repeated torture: the blows with bags of sand had pressed down his chest and injured his lungs.

But when OVRA realised the uselessness of the information and the deception, Silone refused to become a spy. This is demonstrated by the archival documents as discovered by Giuseppe Tamburrano. (See “Il filo della vita”).

The character and the confession.

The accusatorial theorem has been based on two things: the character and confessions of  Silone.

Silone was a weak and fearful boy who, while in Rome,  was seduced and recruited by a policeman and became a professional spy, until,  overcome by remorse, just like any decadent Northern European bourgeois  he fled to Swizerland, because only there could he find the best medical treatment in Europe and the best psychiatrist in the world to help him solve his mental problems and help learn to write, for example, a Fontamara in an attempt to redeem himself for the wickeness committed.  Elizabeth Leake has worked at her best on this thesis. (See “Character Assassination”).

However, as at the end of the day, truth will out,  Silone, according to the accusers,  gave himself away by letting slip into his writings, compromising and revealing words, such as madness, betrayal, despicability and remorse!

Here are the real facts.  First of all  his public and private life contradicted totally the theoretical accusations. He was anything but coward, timid, or easy to persuade, since his adolescence, and during the first years in Switzerland he did not suffer psychological disturbances for bad motives, as he had problems of a completely different nature. In the difficult circumstances in which he was living, he was painfully elaborating a conflict, getting aware of the historical event regarding “The God That Failed”:  the degeneration of an ideology to which he had wholly sacrificed himself.  (See “Il filo della vita” and “Cronologia”).

With regard to the alleged cryptic confessions, it is enough to have read Silone and know his life. (See “Cronologia” and “Le Opere”).

Silone is not a painter of the Italian Renaissance, who inserts a self portrait between the side figures of a work of art. Silone is a writer who transfigures his strong ideas and political passions, his soul impulses, his personal vicissitudes in the main protagonist of his books.

The autobiographical part of his works is in the positive characters and the madness is that of the professional revolutionary.  In no physical, psychological or family detail does Murica resemble Silone, as has been said by the accusers. An obvious falsehood suggested by others, as the accusers do not seem to have read all Silone’s literary works.   Silone’s disappointment was immense when he discovered the betrayal of the ideals by others, including the party for which he had fought so hard. With regard to despicability, among other occurrences, he himself had witnessed a behaviour of this kind  when  he saw his mother’s corpse being robbed while it still lay under the rabble and he was not yet fifteen.  Then, so great was his desperation at what he had seen and because of the fear that overtook him which made him run away and hide, that his desperation changed into remorse.

This gives a deep motivation to Silone’s  playing  all his cards later,  in order to avoid being absent from another situation which will involve him:  a reason profound and intimate that will push him to attempt to alleviate the suffering of his brother in prison.

The roots of the infamy

The exceptional and persistent clamour that arose from such a botched up theory — which covered with disgrace a man who until then had been universally respected — found fertile ground. (See “Press Review” and previous collection March 1996-January 2006).

There has been an a priori support for the accusers by people who, knowing better,  could have refuted the accusations, soon followed by insinuations and declarations about Silone bothered by remorse and schizophrenic.  This provided  Biocca, Canali, Leake and others with a pretext of madness and wickedness to the accusation, otherwise not plausible,  on Silone spy since his early youth  and even guilty for the death of his brother.

Above all,  however,  Italy is the only European country with a history of destruction and disappearance of democratic socialism and the criminalisation of its exponents. Italy, the only European country to have both Fascism and the strongest Communist Party in the whole of the West, today claims the persistent and substantial organized presence of ex Fascists and ex Communists, nostalgic for Leninism-Stalinism.

Unfortunately, the smears against Silone have spread and flourished in the USA and in Anglo-Saxon countries in general.

It maybe considered that the defence was useless, seeing that the accusations were endorsed by people of Anglo-Saxon culture?

Because of his criticism of party and ecclesiastical apparates, for his militant antitotalitarianism, for his criticism of wild capitalism, for his utopian and heretical christianity like Gioacchino da Fiore, Silone is a paradigm of intellectual freedom and loyalty,  a powerful figure who upsets many people. (See “Le opere” and Silone’s political and moral essays).

His vision, his cultural expression of democratic socialism, non authoritarian,  non violent is in some ways  precursory and  makes Silone an icon of worldwide expectancy for the whole liberal area.

Silone accused of being a spy,  victim of pathological and monstrous duplicity,  is a death blow to Silone as a writer, seeing that Silone is a moral writer.  The slights to Silone inevitably destroy his value as a writer.    Simul stabunt simul cadent.

Today Silone is never mentioned as a great antitotalitarian intellectual, nor a great writer of the 20‘ Century.

Any day now, we could see another “Trial of a corpse” as in the case of Pope Formoso.

In 896, Pope Formoso was brought to justice nine months after his death. He was taken from his tomb, dressed and seated on the Papal throne. A deacon lent his voice in order to defend him against charges of insubordination and duplicity.

Whoever wishes to visit Abruzzo to go and dig up Silone’s body, should stop and look at the mountains around Pescina. At first glance they appear severe and impervious. However, if you look closely you can see  grass, plants and small bushes which flower in between the rocks.

This is like Silone, clearly remembered as a tall person, with a sweet and deep expression and a superior calm with which in Italy he endured the political and literary ostracism  but also the melancholy circumstances in which he lived,  while he expressed with strength and power his ideas always the same, always repeated in his speeches, his articles, his essays, his literary works.  For him “the word be either yes  or no”.